Inside the Polaroid Archives Pt 3

By now you’ve probably all seen photos taken by the 20 by 24″ Polaroid camera. You might also have gotten close enough to an original to see the unbelievable detail that they display. Below is my portrait of a young John Reuter, director and “Keeper of the 20×24 Flame.” But here are some shots you’ve probably never seen. An ad that features a bald guy and a gorgeous model’s photo. This was 1980, well before bald was popular. Polaroid was the first to to use sexy bald men as a device to attract viewers: This guy’s modeling career took off after this.
Here’s another unique shot. It was done in Maine on an outing to photograph for Bill Wegman and his dog, Man Ray. 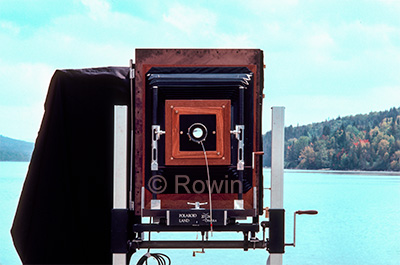 In any event, we wish John Reuter and his crew best of luck with the new 20×24 Studios. You can read all about them here.