Inside the Polaroid Instant 40″ x 80″ Camera

Polaroid built a 40″ x 80″ “instant” camera which was basically a room with a hole in it for a lens and a large vacuum easel, inside the room, on the other side of the lens.

There was one built in Boston’s Museum of Fine Arts.

Others were built around the world, on the fly, with the “room” usually created out of rolls of black vinyl supported by scaffolding.

The photos here were shot by Stanley Rowin in Boston’s MFA.

This photo shows the process of focusing the lens. Ideally the room 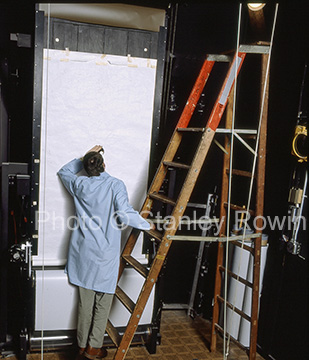 would be dark and the light hitting the subject being photographed would be projected onto this film plane.

One operator, outside the room, would focus the lens by listening to the shouts of the operator inside the “camera” looking through the loupe onto the film plane.

On the top you see the brown film negative that will be pulled down the vacuum frame to the floor prior to the exposure. The white paper is used as a spacer to verify focus around the image area.

When it’s time for the exposure, both operators are inside the camera, in the dark, wearing infrared goggles. You see the infrared light source on the extreme right of the frame in the yellow lamps. The operators pull the negative down to the floor.

They expose the film, then create a sandwich of the negative, the white roll of positive “sheet” material at the bottom and the “pod” developing chemicals.

The sandwich then goes through the stainless steel rollers, seen below the frame, at the bottom. 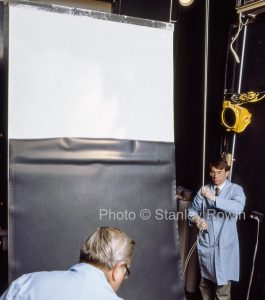 The sandwich was then suspended inside the camera as shown above. The film was developed for about two minutes and then peeled apart.

Below you see the sandwich being peeled outside the “camera,” under the lens. 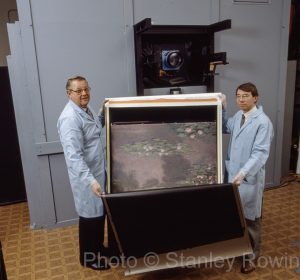